Posted 5 years ago by feefisgodalmighty 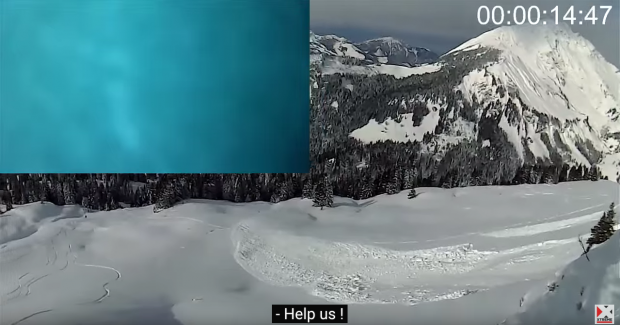 With the recent heavy snowfalls across the Alps onto a thin and unconsolidated base and a poor start to the season, ‘powder fever’ is high, but so is the avalanche risk.

With this in mind, we revisit an accident from last season the video of which which shows the entire incident from slide to rescue.

Dennis Corbet and Colin Gomez are 20 year old students from the Lausanne area, and after a week of heavy snow, they ventured out into the Chatel ski area to ski some off-piste areas they know.
It looks a pretty innocuous slope, and the sort of thing many might tackle without thinking.  The slope was, for the most part, a relatively gradual slope,  but a short pitch of it exceeds 30 degrees and it’s this section which saw a slide of approximately 40m wide slide 200m long and 70-80cm deep get triggered by Dennis towards the end of his pitch. These guys didn’t blindly drop in either, the did some checks at the top of the slope for example cutting paths to watch for slip, but ultimately decided to take the chance. Colin sensibly waited at the side to observe the run which is the correct thing to do, so you have a clear view of the skier but also so you’re clear of anything that might release.

After an initially good run, Dennis did a small jump and it was on his landing that the slide was triggered.

It’s interesting to note the timer overlaid on the video, and that even in pretty much ideal conditions, it was still getting on for 7 minutes before Dennis was located and uncovered to the point that he could breathe.  Consider how long it might have taken if the slide was bigger, he was buried deeper or visibility was poorer, and then consider again, the all-important 15 minute window!

Watch and learn....
We’d also be interested to see your own comments on this video, can you see anything on the slope from the footage that might have given additional warning signs?  We know a few but would like to know what you think