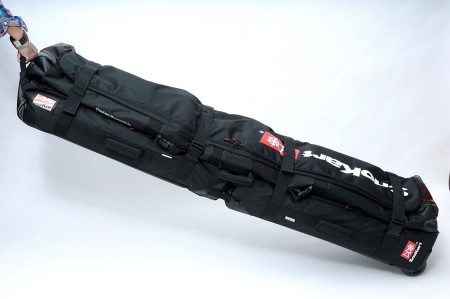 (this the expansion of a  review I wrote for another site)

My old luggage was falling apart, but it had survived almost 20 years and numerous trips.

One of the things that I always liked about it was the boot compartments at each end, meaning I only had to carry that, a rucksack and a skibag without having to faff about with an additional boot bag.  Looking for a replacement, I could only really find the Salomon Tanker 130 as an equivalent replacement but being ~£140 was a little off-putting as well as finding most places I checked didn’t have it in stock.

I came across SnoKart and was quite taken by their Black Kart system. This is a modular system that gives 3 bags which can be connected together in various ways to make life easier. Two make up the hold-all, and a double ski-bag. The two hold-all bags then strap onto the ski-bag, using the skis as the ‘spine’ to become a single, wheeled luggage item that makes life much easier getting to and from the airport/car/transfer coach. The hold-all is certainly large enough for all my needs, but lacked the boot compartments that I liked. This was solved, however, with SnoKart’s Boot Airliner which are a couple of individual boot bags which can clip together. There’s enough space that I can put the boots inside the holdall, and the airliner bags will protect the other contents if the boots are damp.

On paper, the SnoKart is let down by it’s weight, at 9Kg in total for the holdall system and ski-bag. If you’re flying, you might have to check the airline’s baggage allowances as this 9Kg is eating into a significant chunk of the allowance for some airlines. 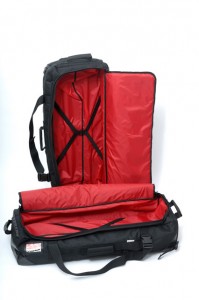 That being said, the weight is there for good reason. The zips, straps, wheels and fabric are all very robust and tough. There’s also ample padding in the outer shell to protect your kit.

At £200, it’s certainly not cheap, but I can probably get rid of a few of my other bags and use this, either as a whole or individual components, for all sorts of trips. When you add up the cost of a decent sized piece of hold-luggage and a wheeled ski-bag, it suddenly doesn’t seem expensive at all.

In reality, however, life isn’t quite as easy as it would seem on paper. To be fair, I did have 3 pairs of skis in the ski bag, as well as some other odds and sods.  The total weight of my entire BlackKart system, fully packed was just over 55kg. That meant I actually found it quite hard to pick up and wheel when fully assembled.  Heavy, certainly, but not helped by it’s length.  However, in hindsight, there are things you can do to make it’s use possibly easier. Chose how you pack your bags.  Put the heavy stuff nearer the wheels in the base holdall working up to the lightest stuff near the handle in the top holdall. This at least means when you are wheeling it, fully assembled, the worst of the weight is down at the wheels and not in your hand.

I also think that carrying 3 pairs of skis is maybe a bit of an unreasonably request of the system.  It CAN do it, but I had to remove the brakes from one of the pairs to make them fit.

To sum up, it’s very well build and has some nice features.  There’s a couple of straps that seem a bit surplus to requirements when it’s in holdall/skibag formation rather than fully assembled and it’s not always totally intuitive what to do with them. Also, zipping it all together when it’s fully loaded can be hard work, especially if your holdall is bulging a little where the zips meet.