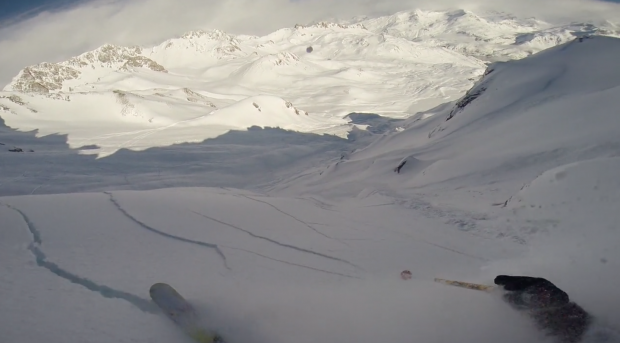 On Tuesday Tignes pro-skier Theo Lange was caught in a small avalanche that he triggered while skiing off-piste under the Aiguille du Chardonnet. At the time, the avalanche risk was reported at level 4, with the added complications of high winds and 60cm of fresh snow having fallen over the previous couple of days.  He was skiing alone, and hoped to get some camera footage for a production company he is currently working with.

In a TV interview, he told France3 (our translation)  “I went down, my feet were stuck and it just took me with it,  fortunately my boots didn’t release as my skis stopped me until the slide passed, I was very scared.” In only a few seconds, he covers the full length of the couloir, with the added good fortune that there are no terrain traps at the bottom. He admits he knew the risks and was aware of the avalanche risk level, but still took the chance but  stated that, when the slope let go, he thought he was going to die.

Theo had his helmet cam running, as he’s currently working with a film company, and his footage, interview and France3 report can be seen here:

As we reported earlier, other skiers in the Espace Killy have been less fortunate when they were caught in an avalanche on Bellevard