ONE Wasatch unveiled to be MEGA resort in Utah

Posted 7 years ago by RDCrisp 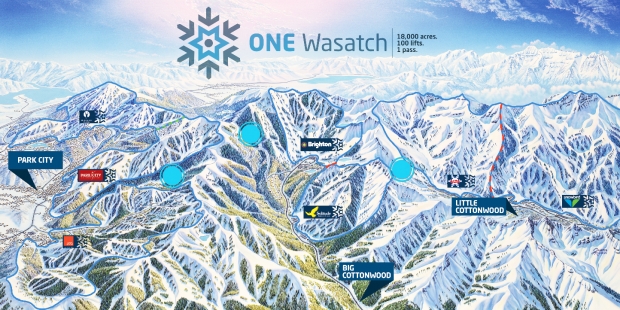 Ever dreamed of skiing the fabled “Greatest Snow on Earth” in the snowy state of Utah but been unsure of where to start? True, due to the many resorts scattered around the State, picking a main base in Utah has always required a great deal of planning and research. Have I made the right call? Well, those problems are set to change somewhat with the announcement of Ski Utah and Area Resorts joining forces to create the mega resort of ONE Wasatch. “ONE Wasatch would offer the largest lift-served ski experience in North America – over 18,000 acres, 100 lifts and more than 750 runs, all on one pass. And all on “The Greatest Snow on Earth.” Below is the official press release:

(SALT LAKE CITY, UTAH) – Today, Ski Utah along with seven ski resort mangers released a new map detailing lift alignments of two of the three potential connections for an over-the-snow interconnect between all seven resorts via chairlift and ski run called ONE Wasatch.  ONE Wasatch would offer the largest lift-served ski experience in North America – over 18,000 acres, 100 lifts and more than 750 runs, all on one pass. And all on “The Greatest Snow on Earth.”

The two lift alignments are located on the attached map and include:

The third connection between Canyons Resort to/from Park City Mountain Resort will be determined at a later date.

“Connecting seven of Utah’s finest ski resorts while preserving both our water quality and an unrivaled backcountry experience is not an impossible task,” said Nathan Rafferty, president and CEO – Ski Utah.  “Today we have decided to move a step forward in the vision process by conceptualizing lift alignments on a map to continue providing information to the public, encouraging dialog and listening to feedback about these potential connections.”

In addition to the release of the map, Ski Utah shared results of a survey they conducted about the ONE Wasatch concept. The survey was sent to more than 35,000 individual online subscribers of their monthly newsletter and snow reports. Since the respondents cover all types of recreationists that follow snow/skiing and riding conditions, we can infer they include both downhill as well as backcountry users.  The following summarizes a review of the responses.

For more information regarding ONE Wasatch please visit our website at www.ONEWasatch.com.

For media information, contact Ski Utah Director of Communications Susie English at 801.433.2016 or by email at susie@skiutah.com.

Ski Utah is the marketing firm owned and operated by the 15 statewide ski resorts that make up the Utah Ski and Snowboard Association. The organization has been creating brand awareness of and demand for the Utah wintersports product since its inception in 1978. Ski Utah’s primary functions are concentrated in marketing, public policy and public relations. Information about Ski Utah and its members can be found at skiutah.com, on Twitter and Instagram @SkiUtah and on Facebook at www.facebook.com/skiutahyeti. This release and other press information can be found in the online press room at /News/.

Click the map below to see a larger image of what is planned. 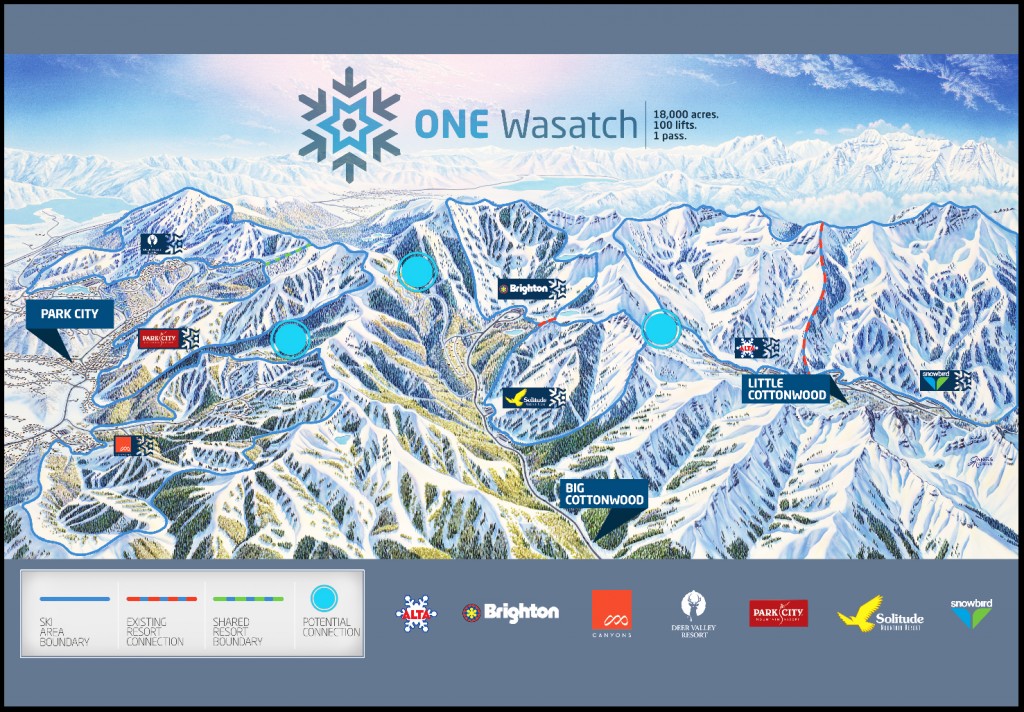 “ONE Wasatch would offer the largest lift-served ski experience in North America – over 18,000 acres, 100 lifts and more than 750 runs, all on one pass”

To see what they’re planning, check out the following video:

Again, for more information see http://ONEwasatch.com/. Do remember however, that at this stage ONE Wasatch is still in ‘concept’ form.

Let us know what you guys think of Utah Assembled. Will it be ONE Wasatch to rule them all?