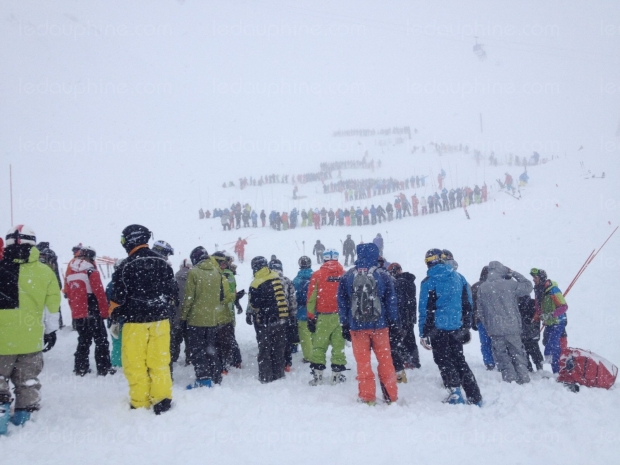 Last week, three UCPA ski instructors from Tignes were found guilty of causing the death of a trainee ski instructor in an avalanche in Tignes in December 2012.  They received suspended sentences and are banned from teaching for 1 year.

This incident strikes particularly close to home as I assisted in the search of the avalanche.

When I arrived in resort the previous week, on a training course, we were skiing pretty much just on man-made snow with only one or two lifts operating, but we saw meters of snow come down almost every day for the next week.  The off-piste was amazing, but the avalanche risk was commensurately high.  On the day in question it was a 4/5 risk and visibility was poor with low cloud and show showers.

From my understanding of events, the group were trainee instructors, with UCPA in Tignes, and it was a ‘day off’ from the official instructor training.  They weren’t carrying any avalanche safety equipment, so no transceivers, no shovels, no probes. I can only imagine the pressure the 3 instructors were under from the trainees who would have been keen to enjoy the thigh deep powder, especially on such an accessible slope, indeed I could see the slope from my room in Le Levanna in Tignes le Lac.When it happened I was in the Aeroski with Roland, a mountain guide and our trainer. We didn’t witness the actual slide, but I saw the commotion below, with dogs and whatnot and asked Roland if it was perhaps a training exercise. Being first week of the season, there were quite a few training exercises going on. The Aeroski was also pretty steamed up so was hard to see. He wasn’t sure so when we got to the top we headed straight over to the Pisteur’s hut which was abuzz with activity where he asked what was going on and if he could help, explaining he was a mountain guide and we were his trainees. Without another word, the Pisteur literally threw a pile of probes and shovels at us and asked us to go down and help at the avalanche site. We immediately joined the lines of volunteers, probing across the avalanche.  The 4m long probes are significantly heavier than the little alloy ones you carry in your pack, and it quickly becomes hard work, but you’re constantly aware that someone’s life may depend on you.  Every stroke of the probe I was questioning myself

“was that too far from the last probe hole, could there be someone between there that I’ve missed?”

” Was that a rock?  Was that something else?  How do I know what a person feels like through a probe?”

Every so often there’d be a shout, a hand would be raised, and a small team with shovels would descend to dig. After several false calls at various locations across the slide, there was another shout from a line behind us and the diggers got to work, pulling out the girl.  No-one stopped probing, despite being aware of what’s going on behind us as there may still be others trapped, there’s no way of  knowing so you just have to keep going.  A pisteur skied down to the group behind us with a defibrillator, and she was soon strapped into a sledge and taken off the mountain where she was transported to hospital in Grenoble.  Unfortunately, we all know the outcome.

We arrived on scene at around 11am and we finished probing some time shortly after 2pm without having stopped for even a minute.   The slide wasn’t massive, but it still took an estimated 200 volunteers over 3 hrs to probe it.It was the quickest and the longest 3 hrs of my life.

It puts things in perspective in my mind when you consider the crucial 15 minutes rule and that there may only be a handful of you if you’re off-piste with friends.

I have no shame in admitting that, that evening, I was just a little emotional, not least that I could see the Piste Bashers clearing the slope from my hotel window.

We did all we could.

When you go off piste, do you do all you can to ensure your own safety?