Could fat skis cause knee problems in the longer term? 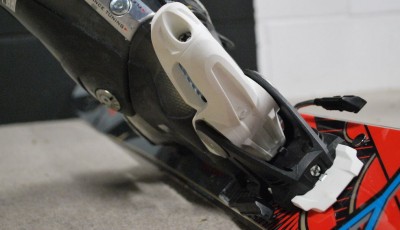 As skis get fatter and fatter and are beginning to be used everywhere both off-piste and on, could this fat ski trend contribute to the plethora of potential knee injuries we see as skiers?

There has been some occasional discussion regarding fat skis or powder skis and the potential for knee injury and to date there’s no real research been done examining if they do cause any problems.  Some suggest thatas a fatter ski sinks less in the powder, then landing from jumps can exert a greater force on the legs and body than if you were to sink into the powder up to your neck, and there’s also been mention of the increased weight and swing-weight of the ski with regards to torsional forces on the knee.[1]

However, as ‘all mountain’ skis get fatter and are now getting to the 100mm underfoot or wider we are seeing more and more ‘fat’ skis being used on the piste, I find myself wondering about the lateral forces on the knee joint.  This is the force exerted on your knee to keep a ski on it’s edge when on the piste.  It doesn’t apply when skiing in powder or snow soft enough to allow the ski to turn on a platform of snow under it’s base, only when the ski is set on it’s edge on hard-pack.  The natural tendency for your ski is to lie flat on the snow.  When edging you are leaning the ski onto it’s side and, amongst many other forces actions and movements, are resisting  it’s tendency to lie flat on the snow again otherwise you just slide sideways.

With narrower skis which are around the same width as your foot or narrower, the lateral force is pretty low and almost all the force is up and down your leg, pressing the ski edge into the snow.

As the ski starts to get fatter than your foot,  you’re not just setting the ski on edge but also levering yourself up off the snow.  This has a double effect : 1 you’re adding the force required to lift you off the snow to to the forces involved and 2: the wider ski is adding a longer lever to the lateral forces applied to your knee. 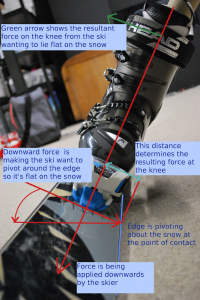 I pulled together a very basic 2D model in Working Model 2D which allowed me to play with forces and angles.  I used rough measurements of my own leg and body to get an idea of lengths, weights and forces. and then simplified the model such that the interface between the ‘ski edge’ was a simple pivot, the ski and lower leg element were a solid structure, and the knee joint between the lower and upper leg elements was another simple pivot.

I then set the model at 30 degrees to the horizontal and applied a force directly down through the leg, somewhat similar to carving a turn on a wide flat piste. As expected, without any lateral force supporting the knee joint, the system collapsed.  That’s to be expected, however, we need knee stability  even just to stand still, but it at least collapsed in the way I expected with the knee moving outwards as the ski flattened on the snow.

I then played about with lateral forces on the knee joint until I could keep it reasonably stable.  The model started in a state of unstable equilibrium so it would be impossible to get it to stay perfectly stable once the forces were applied but again, it was all moving in the directions I anticipated.

The next step was to rebuild the model using a narrow ski.  For this, I halved the width of the ‘ski’ and again used a simple pivot at the contact point with the ‘snow’.  Again, I played around with various forces on the knee and what it appears is that as the ski doubles in width, so does the lateral forces on the knee.  Now I recognise that this is a VERY simple model and the methods are more than just a little flawed so I am not going to suggest the figures themselves are anywhere near accurate but it does support my original hypothesis, that fat skis, when used on piste, significantly increase the lateral forces on the knee.

I would go so far as to suggest that we have not seen any significant incidence of knee injuries from this for a number of reasons.

After some further discussion, I’ve done some more modelling and have some rough figures for the forces in question.

Also, assuming a force of 1G due to the turn, and from that a force of 760N acting down through the centre line of the leg (to keep things simple.  We don’t need a real world calculation of the forces actually acting when skiing, as we’re looking to calculate the relative change based on width. That factor should remain constant irrespective of the force value)

I do not profess to be an expert in biomechanics nor am I a fully qualified engineer, but I do consider myself to have a strong technical background and a solid if basic understanding of both disciplines[2]. I’m more than open to correction or explanation of where my understandings are flawed but if I’m right, then it explains my own experiences of knee discomfort after skiing fat skis on the piste (115mm under foot).  It has been encouraging to come across posts from elsewhere such as this from RealSkiers.com which asks, do we need fat knees to ski on fat skis?

As I said, I am no expert but believe that my reasoning is sound, if a little basic and I would be keen  to see some more research and discussion on this aspect of the effects of fat skis on the knee.

[2] : I studied Mechanical engineering at Strathclyde university but dropped out before graduating to work in IT. I also studied Sport Science briefly and was a ski-tech and equipment specialist for a number of specialist ski and mountain shops in Scotland.  Read more in  ‘meet the team’