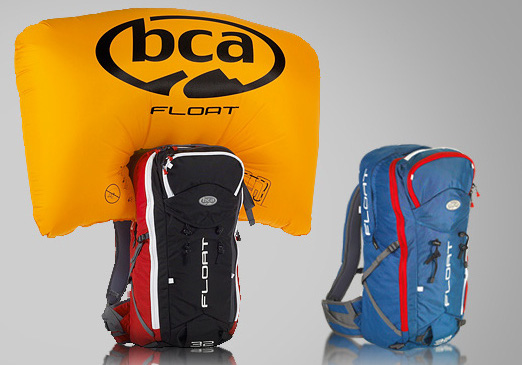 A week or so back, a nice big box arrived at Chateau Pow, containing a new BCA Float 32 airbag rucksack. I had one of the original Float 30 models however with the recall that was issued in October, that particular model had to be returned to BCA in Colorado. Rather than faff about shipping the old one back and forth, it would be as easy to arrange for a new Float 32 to be returned in its place, and a deal was struck with the very helpful chaps at BCA.

I was due to fly out to Nendaz for a few days on Thursday evening, so it was impeccable timing that the new Float 32 arrived on Wednesday afternoon. All the BCA packs use the same 290ml steel cylinder, so I already had a full cylinder waiting from the old pack.

First impressions were that it was very well made, probably better so than the old one, but more importantly, significantly more compact. The airbag itself is packed into an almost square pocket in the top, rather than around the sides and top as it used to be, which slims the pack’s width significantly.

The leg loops are still supplied but are totally removable and are easily stashed in the inside pocket. Two ice axe carry points are on the front of the pack, but are very discrete and low profile. The diagonal ski carry straps can also be stashed inside their own little pockets leaving a very clean pack with no hanging straps to catch on things. The helmet carry cover is also now housed in its own little Velcro pocket on the front and is very quickly and easily deployed and hidden, so no more hunting about for it in pockets.

The chunky red zip for the main compartment runs from almost the very bottom of the pack, right up and round, making it easy to access all of the compartment from both sides, or lay it down and fold the entire front down to expose all the contents. The equally chunky white zip allows access to the pocket where you stash your probe and shovel, with handy sleeves for the probe and shovel handle. Another chunky red zip lets you into the cavernous and fleece lined goggle pocket, into which I could easily stash, not only my goggles, but also a pair of sun glasses and my wallet. 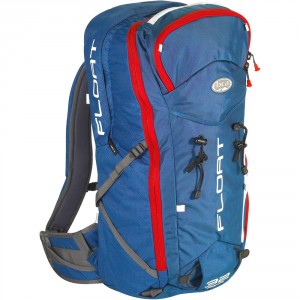 The waist belt has the same forged aluminium buckle and a huge pocket on the right hand side. The left hand side provides a gear loop onto which you could clip carabiners and other equipment.

Equally, the airbag release pull can be installed on either shoulder strap, but it will require a bit of fiddling with a screwdriver to free it from the default left strap, so not something you’d want to do willy nilly. Whichever shoulder strap you install the release in, the other strap is left free to accommodate the tube for a hydration pack if you so desire, although in this model of rucksack, there’s no dedicated pocket to house the hydration pack itself, which could be an issue depending on the hydration pack you use, and what you’re carrying.

The 150litre airbag inflates up behind and out to the side of your head. It doesn’t come forward, either side of your head like some, which means the position of the pack on your back is less critical.
So that’s what the pack is like, but how is it in use?

The upside of the cylinder used by BCA is that it’s larger size and slightly lower pressure than the likes of ABS or Snowpulse means it’s easier to maintain and refill yourself. I got mine filled by the chaps at a local paintball center a couple of days before flying out. While the cylinder itself is larger and heavier than some others, the pack weight of just under 2.5kg bring the whole lot in at around the same or even lighter than some comparable packs.

I found the waist buckle was sometimes fiddly to fit, and once fitted it wasn’t always that easy to tighten, requiring a bit of jiggling and pulling of the strap to get it to tighten. It also seemed to need frequent retightening, but this may improve with use, only time will tell. The pocket on the waist belt was difficult to close, requiring some juggling of the zip pull, or needing two hands to hold it st one end while the zip was pulled. This may just be down to the zip being new, so is something I’ll revisit with use and revise in this review if needs be.

The pack’s narrower and more compact form certainly is an improvement, but in some terrain, especially moguls or landing from jumps or drops, I found it was a little tall and hit the back of my helmet off the pack several times. Granted, if you’re skiing mogul fields then you won’t necessarily be concerned about the avalanche risk, but I don’t tend to take several rucksacks with me when I’m away skiing so would likely be using this every day irrespective of the terrain I’m skiing.

The side compression straps also pull in only at the middle and lower half of the pack, so the top half can bulge a little in comparison.

That being said, I found the pack very stable and comfortable when in use, and the adjustment of the waist belt was only a minor niggle. Even with a DSLR and lenses, plus helmet cam, spare batteries, a litre of water and other stuff, bringing the total pack weight up to about 20kg, it still didn’t budge. My legs were giving up long before I felt any fatigue on my shoulders, or discomfort on my hips from the pack.

Repacking the airbag is significantly easier with the one large pocket, and the clever easy-burst zip not only keeps it secure when packed, but protects it, is easy to open and close to allow inspection but also releases easily when the pack is triggered.