Are you the Gondola Girl? 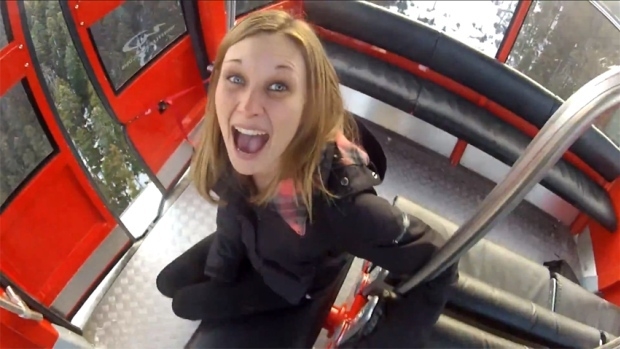 I’m sure by now you’ve all seen the video that went viral of Graham Dickinson’s base jump out of the peak 2 peak gondola at Whistler Blackcomb, and his ‘assistant’ along with it.

That assistant was Kathleen Adams, originally from Ontario who is reportedly charged with mischief to property worth over $5,000 and wilfully resisting or obstructing a police officer for her role in the incident.

In a statement to Whistler’s Pique Kathleen has made a public apology, although it’s rather long winded..

“Nothing To Gain, Everything To Lose

“The illegal, Peak-to-Peak Gondola, base-jumping incident happened on February 6th, 2014; a day that changed my life forever. My name is Kathleen Adams, and I want to address the severity of my actions in hopes that I can prevent another, similar incident.

“This has been a life changing experience for me, which I would never wish upon anyone. My bad decisions have caused Whistler Blackcomb, the RCMP, my employer, and the community of Whistler a lot of money, needless stress, wasted energy, and negative media attention. This all could have all been avoided; a lesson I’ve learned the hard way.

“Most importantly, I am concerned that people will see the video of the jump and try to copy the jumper’s actions. I don’t want others to watch Youtube and think it was okay. It is not: it is unsafe, irresponsible and illegal. Illegal base jumping is extremely dangerous, and it could harm more people than just the jumper.

“On the day of the jump, I was too scared to tell the truth, and this only made it more difficult for everyone involved. Had I simply been forthright with the authorities from the start, I could have prevented costs to Whistler Blackcomb and the RCMP in terms of search and investigation resources.

“The RCMP were forced to put an unnecessary amount of time into piecing the case together and identifying and finding the base jumper, Graham Dickinson. For this, I am forever regretful.

“In the following days, matters got worse. Whistler Blackcomb had to search abroad to find a specialized mechanic and the pieces they needed to fix the gondola cabin. Just figuring out the damages took two months. There was no replacement cabin, which meant Whistler Blackcomb was losing money every day they weren’t able to use the damaged one. They will likely have additional costs because they have to increase security measures.

“On the day of my arrest, CBC news cameras were outside my workplace trying to question me for a piece on the 6 o’clock news. They even asked my managers and coworkers questions about me. My face was plastered all over the internet, television, and newspapers in the following days.

“I was approached by the local newspaper for an interview or a statement. I was not able to go back to work for over three weeks, until all of the negative attention calmed down. At that point, I didn’t know if I was ever going to get my job back, and I was completely heartbroken. I was too mortified to show my face in public for fear of being recognized. I was inconsolable and spent most of the time in my home, afraid to leave. When I was forced to go out, I wore sunglasses and hoods to hide my face. I didn’t want any attention associated with the jump. I was mentally and emotionally damaged, humiliated, and ashamed of my actions. It has taken months to feel comfortable enough to show my face in public.

“My friends and family in Ontario heard about the incident on the news and I was questioned by the people I love, asking “was that really you?” I received hundreds of messages: many negative, calling me “stupid” and “annoying.” Almost everyone I knew wanted to know what happened. Everyone was astonished that I could be involved in such a controversy. Luckily, I have close family and friends that support me through this time, offering me any help to show that this act was out of character.

“On the day of the jump, I was approached just before heading up the gondola with the idea of “McConkey Reborn”, referring to a famous base jumper who performed a legal jump off the Peak 2 Peak Gondola. I was stupidly swept up in the moment and agreed to help capture the event on film. I didn’t take a second to think my actions through, or think of the repercussions I might face. I was assured that there would be no harm done and I believed it. I became involved in this incident because I trust people too easily. This is one of the many lessons I have learned through this experience.

Once caught, I tried to talk my way out of the mess I had now gotten into. Of course, it did not work. It only made matters worse; far worse. On the day the video went viral, I realized my life was going to change and I was terrified. I was arrested at work by two police officers, during one of the busiest days, in front of my customers and all of my co-workers. I have never been in trouble with the law before but, at that moment, it was meaningless as I was completely humiliated and my good reputation was permanently sullied.

“Like many locals, I am in Whistler because I am young and drawn to the exciting new experiences and adventures. But one needs to take the time to think of the consequences before acting. I have had to mature very quickly. I now feel like I need to fight for my life here in Whistler.

“I came to Whistler for a season, but fell in love with everything that I am so blessed to be surrounded by. Whistler has become home. I have the best job, friends, community and mountains in the world. Now, instead of fully enjoying the experiences with my friends, my Season’s Pass has been revoked, and I am banned from all Whistler Blackcomb establishments for an undetermined period of time.

“Despite the fact that I had nothing to gain by joining Mr. (Graham) Dickinson on his adventure, I am now before the Courts and facing the possibility of a criminal record which could prevent me from engaging in volunteer work and employment, and travelling; all things to which I have shown a deep commitment.

“This all occurred because one person wanted to make a name for himself and the other stupidly agreed to join in. From the law’s perspective, even though I had limited involvement in the stunt itself, I am just as guilty as if I had been the one to force the door open and jump from the gondola.

“Shortly after, the story was published just about everywhere. Whistler Blackcomb, my employer, and I were bombarded by negative media attention. I was arrested, banned from Whistler Blackcomb, am expected to repay thousands of dollars in damages, and Mr. Dickinson and I have been charged with criminal offenses.

“I am still approached by the question “Are you the gondola girl?” I want to be known as Kathleen: a kind, caring, considerate person, but I have to accept what I have done. I can only learn and grow from this experience, and my hope is that, in writing this, I can prevent anyone else from getting involved in a situation similar to mine, and repair some of the damage I have caused to our wonderful community.